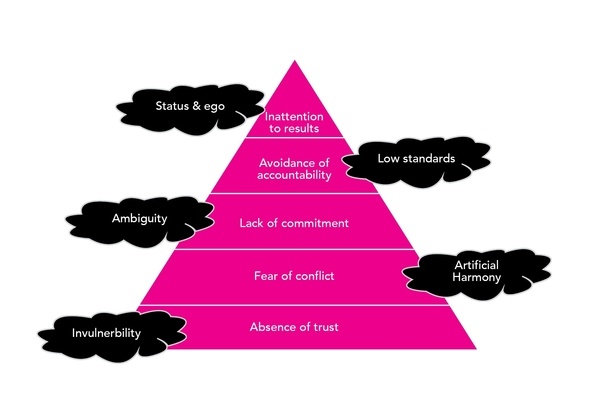 The Five Dysfunctions of a team is a model from teams expert Patrick Lencioni that helps to understand some of the common challenges faced by teams. You might recognise some of these 'dysfunctions' from teams you have worked in or are currently working in. The model works from the bottom up, and progress up the pyramid depends on solving the dysfunction below. So if you think you have a fear of conflict, the real problem is that you are lacking trust. Read on for ideas to solve your team challenges...

The first dysfunction is Absence of Trust. This is at the bottom of the pyramid as it supports everything above it. Without trust, little else can be achieved. An absence of trust in a team shows up as an inability to display vulnerability.
If your team has lack of trust you might spot some of these signs:

Trust is essential for a fully functioning team so if you can see the above behaviours in your team, then you need to act.

The second team dysfunction is Fear of Conflict, this manifests in teams as artificial harmony. Conflict does not have to be a bad thing, productive conflict brings passionate an unfiltered debate around important issues.

If your team has a fear of conflict you might notice the following:

Teams that lack trust will be unable to engage in a healthy conflict so make sure you have established trust within the team and then try these techniques for encouraging more debate and discussion:

The next dysfunction is Lack of Commitment - this means that the team doesn't fully commit to plans or decisions.
If your team has a lack of commitment here are some of the signs you might notice:

Teams that have a lack of commitment will struggle to achieve their goals. If you spot this within your own team, you first need to ensure that people are able to engage in healthy conflict - if they can't do this then they can't air their opinions and will not commit to the decisions that are made. Once you have this, try these initiatives:

The next team dysfunction is Avoidance of Accountability, this is the ability of the team members to call their peers on behaviours that can hurt the team. If you have this within your team you might notice:

The last dysfunction of a team is Inattention to Results. Results refer to the collective goals of the team and in this dysfunction team members prioritise other things such as their individual status, ego, career development or favouritism. If these behaviours look familiar this could be a problem for your team:

If you are suffering from this, first ensure that you have strong accountability in the team. If accountability is lacking, the team will not be able to pull together for the common goals.